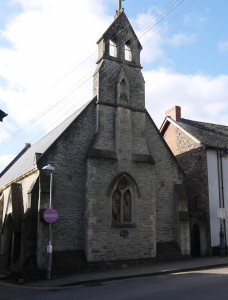 In his last moments, St David, the Patron Saint of Wales, encouraged his monks to “Be Joyful and Keep the Faith”. Brecon enjoys a very special place in Welsh history in honouring this advice since Catholicism here survived the Reformation. From the dawn of Christianity in Wales until the sixteenth Century, Catholicism was the dominant tradition in Wales rooted in the very fabric of the land and this faith served to link Wales to the wider world of European Christendom, of which it was an integral part.

The Act of Union in 1536 meant that the new County of Breconshire was drawn inexorably into the religious revolution set in motion by King Henry VIII when the Catholic Church became progressively oppressed and marginalised, being replaced by a new State Church of England. In Brecon the old Priory was dissolved in 1538 and the Dominican Friary of St Nicholas in Brecon was suppressed with the deed of surrender being signed in August of that year. The Act of Supremacy of 1534 and Act of Treason resulted in savage penalties being suffered by the first martyrs of Breconshire, eventually leading them to the gallows in 1540, for the crime of treason, ie denying the King as Supreme Head of the Christian Church in favour of the “Bishop of Rome”.

The Elizabethan Settlement Act of 1560 provided for the Church of England to be the only officially recognised Church in England and Wales although the then Bishop of London in 1602 implied that Welsh Seminary students abroad felt that Wales was full of recusants, refusing to attend Church of England services. There were draconian consequences for this, and to be a “seminary priest” or to give aid to one, was a capital offence.

Among the Breconshire families noted over a long period for their Catholic recusancy were the Havards, the Gunters and the Powells. Many other “Church Papists” conformed to the outward legal necessities for Sunday Worship, but retained an inward and domestic loyalty to the “old Faith”. Blessed Dom Phillip Powell OSB born in Trallong, near Brecon in 1594 was executed at Tyburn for being a Catholic Priest as was St John Lloyd executed at Cardiff Castle in 1678. Indeed the recusant families of Breconshire were a major source of recruitment to the Catholic Priesthood down to the mid nineteenth Century.   With such a strength in numbers in the Brecon area it seems probable that there was a Priest ministering to the Catholics here despite the proscription of the Catholic religion. The first actual recorded name is that of William Lloyd who was in Brecon from 1642 – 1679 who eventually became Archdeacon of South Wales, possibly residing near The Watergate in Brecon at the house of fervent and charitable Mary and Margaret Thomas whose father Jevan had renounced his religion in 1630 until his last moments, in order to become Mayor of Brecknock. William Lloyd died in The Struet Gaol, Brecon, in 1679, whilst awaiting execution for being a Priest (whilst other Priests were clearly still available from other locations!).

In the latter part of the eighteenth Century the Catholic Mass house in Watergate continued to be active and in 1788 money for a resident Priest’s stipend was made available by a generous widow from the Isle of Wight, resulting in the arrival of Rev John Williams from 1788-1815. The Watergate property was sold in 1805 and became the current Watergate Baptist Chapel. A property was purchased between Wheat Street and the current St Michael Street, including the “Three Cocks Inn”, and it is from about this time that Catholic Parish records begin. The Inn presumably served as the Priest’s residence and a Chapel, although there is a record of Mass being said in a hayloft behind the cottage now numbered 4 St Michael Street. The normal round of Bishop’s Visitations and Confirmations resumed in the 1830s. In 1832 most of the normal civil liberties were restored to Catholics and they were enabled to practice their faith more openly. The current simple Gothic Church costing some £1000 was opened in 1851, under Architect Charles Hansom

The twentieth century history of the Parish was marked by the arrival of teaching Nuns to Brecon, initially the Holy Ghost Sisters from France in 1904 and later in 1948 the Ursuline Sisters from Ireland.

The story of the survival of the Catholic community in Brecon and their loyalty and fidelity often at great personal risk is a wonderful testimony to the indomitability of the human spirit.