Icons and memorials within the Church 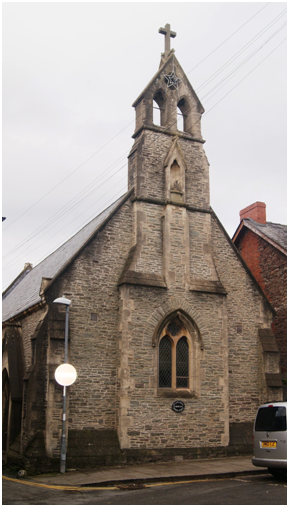 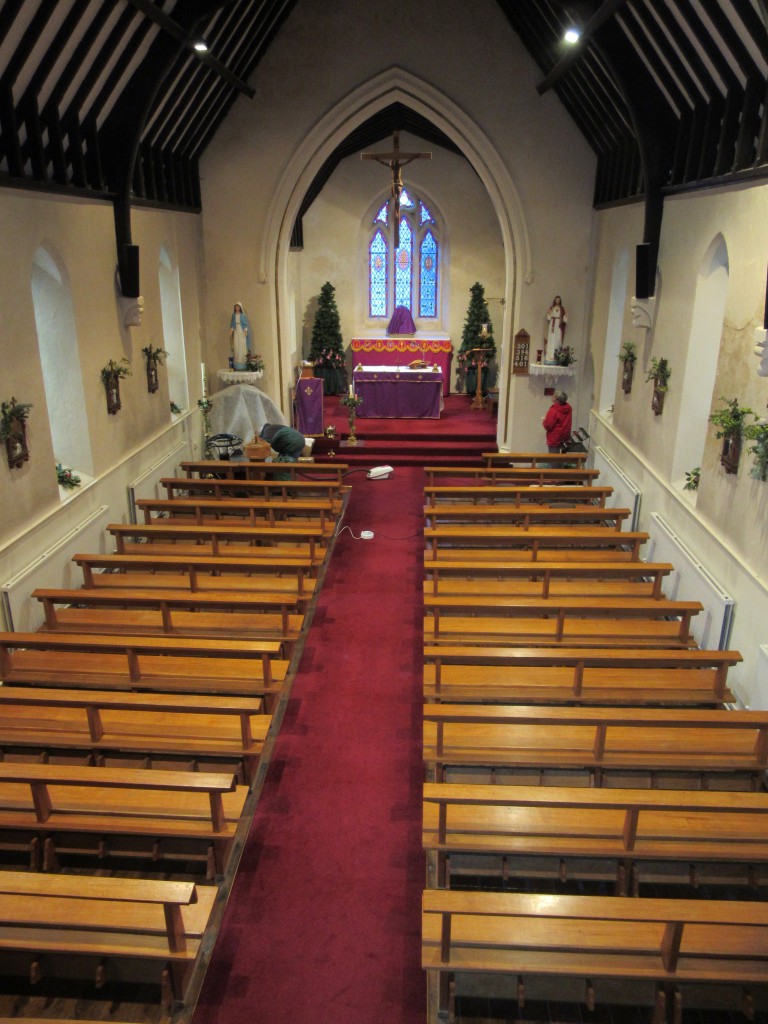 The stained glass windows above the altar have been in place since the church was built and have cast their light on many ceremonies. The icon of Our Lord’s crucifixion was added in the 20th century. 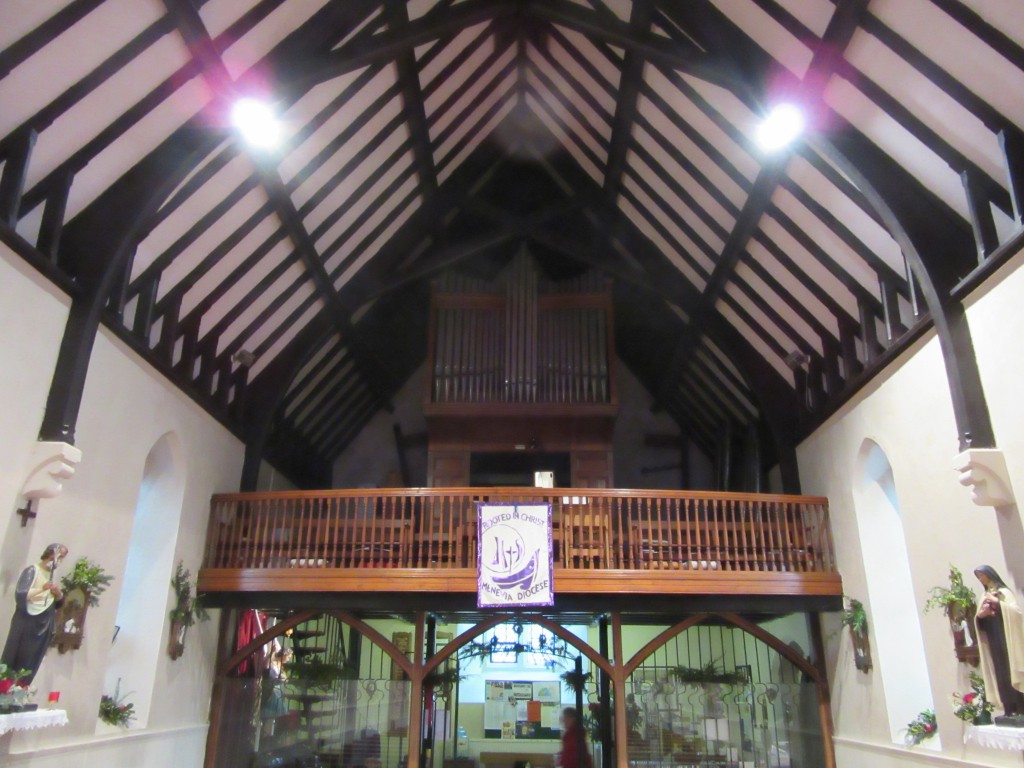 In 2014 the organ installed at the turn of the 19th century was replaced with a smaller reconditioned organ. The cost was met from collections and generous donations from the parishioners.
Icons and memorials within the church. Some of the most striking features of the church are the icons of St Michael, Jesus, Mary and others. These have been in the church for several years and were repainted at the beginning of 2014. 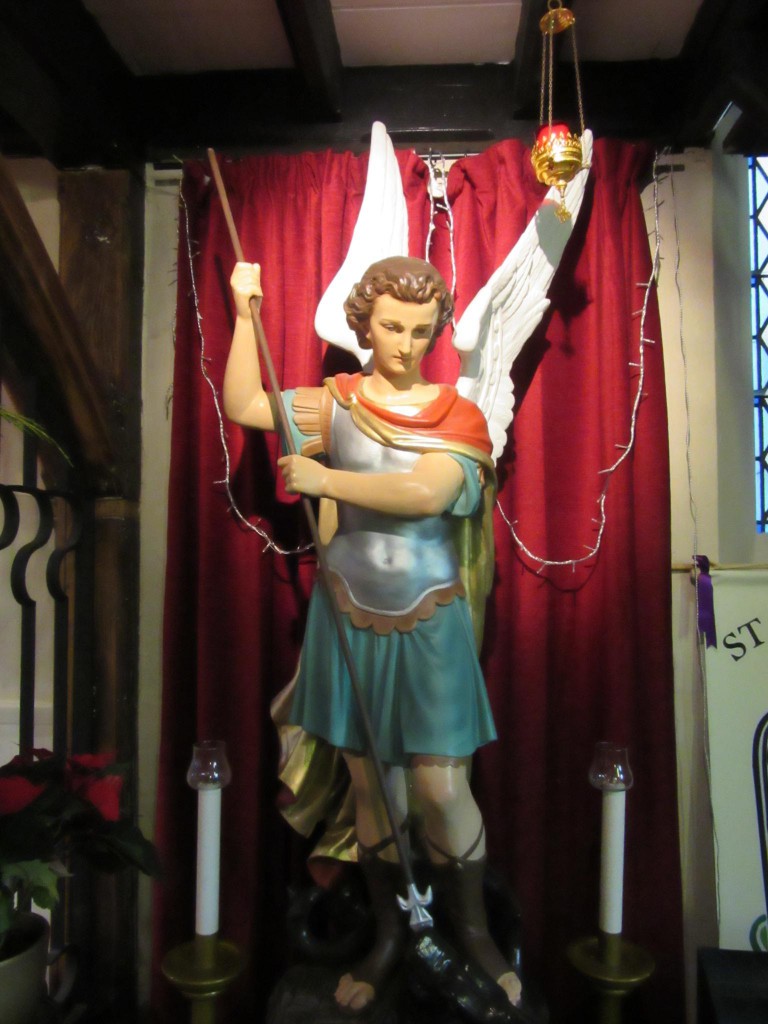 The Archangel Michael is one of three Archangels in the bible. St Michael is the defender of the faith and is usually pictured defeating Satan. The statue of St Michael in the church shows him standing on top of a snake with a spear in his hands. The feast of St. Michael is on the 29thSeptember and in 2014 we had a procession to celebrate his feast day.

People pray the Novena to St Michael the Archangel for nine days before his feast day. 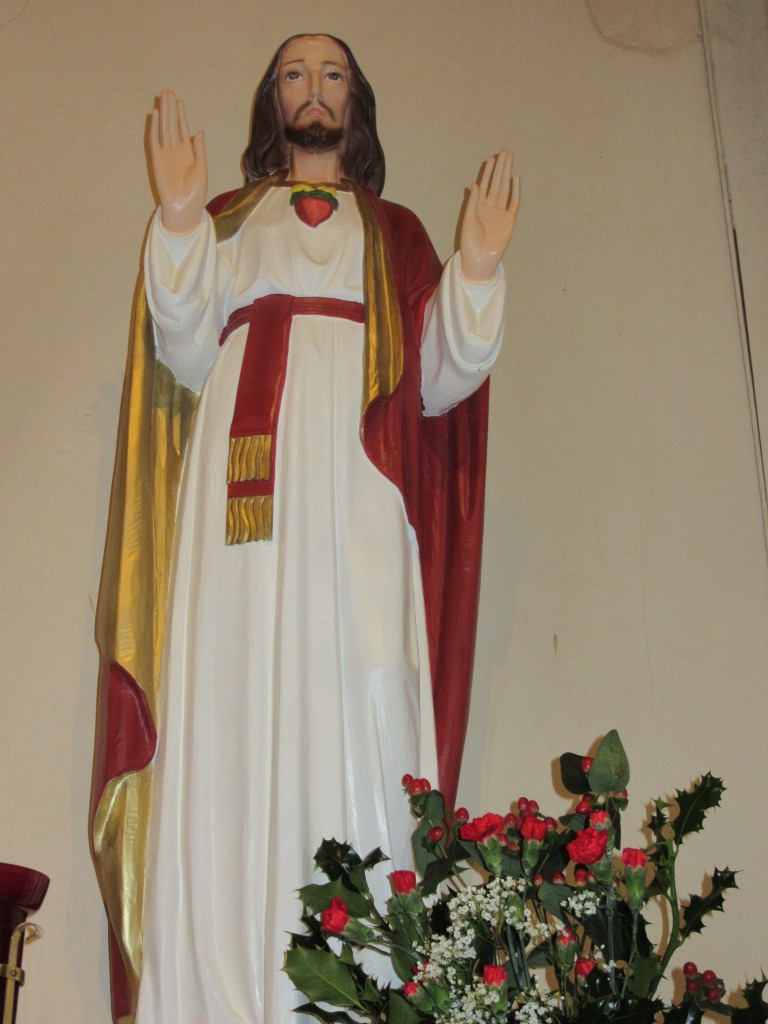 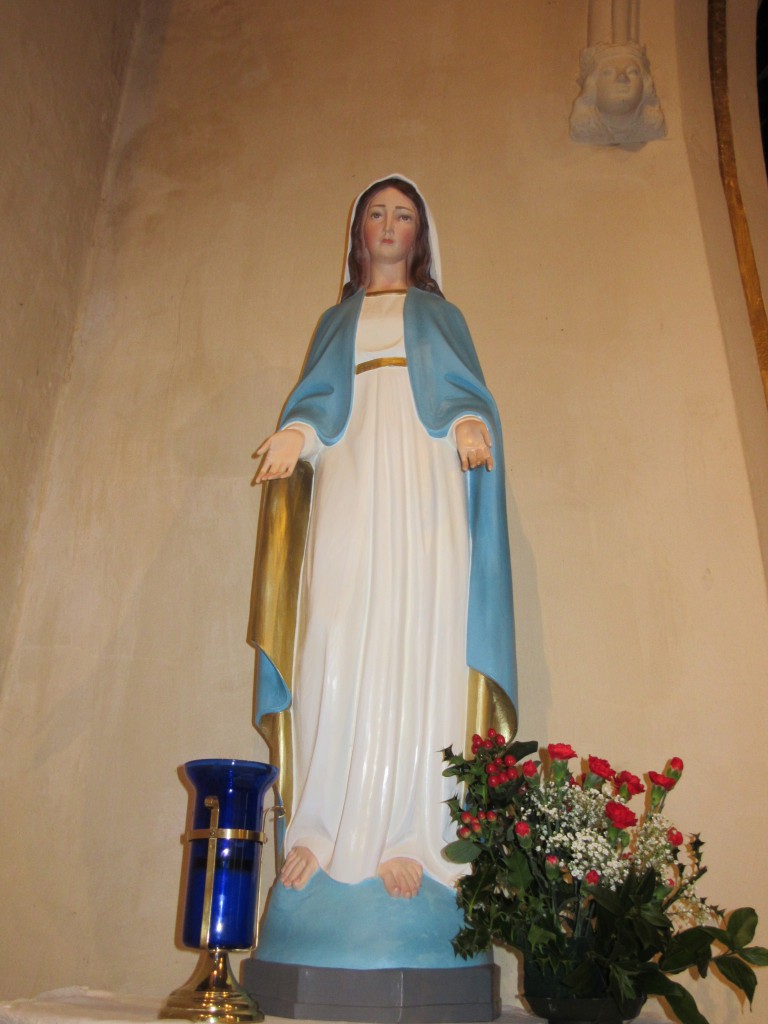 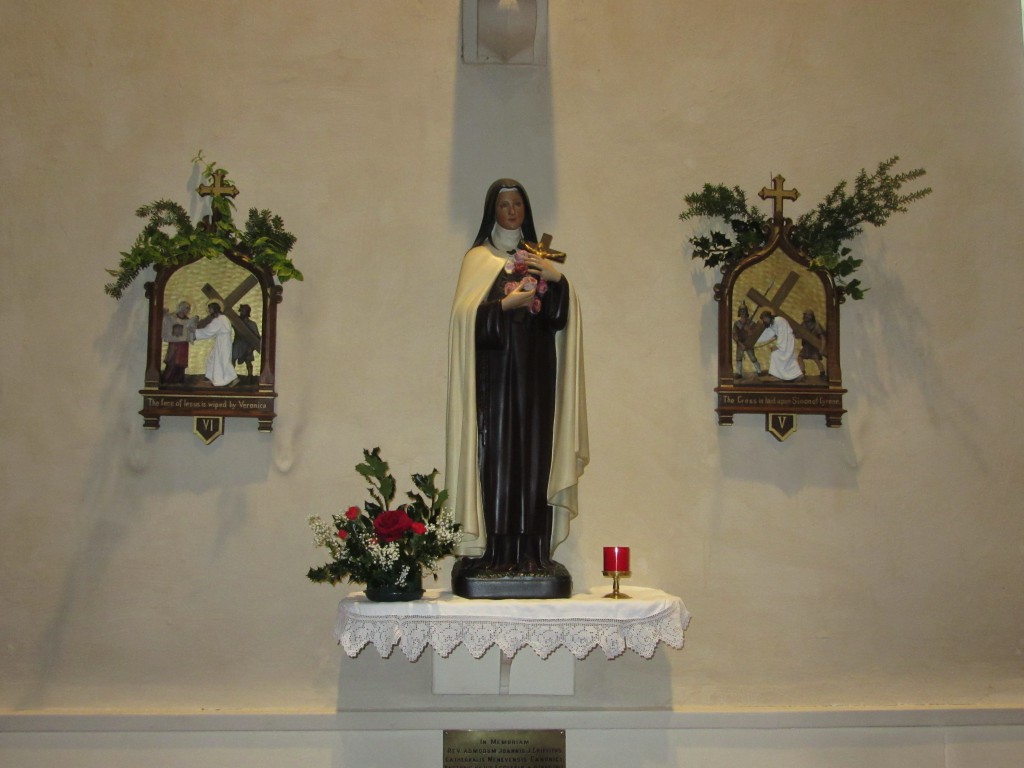 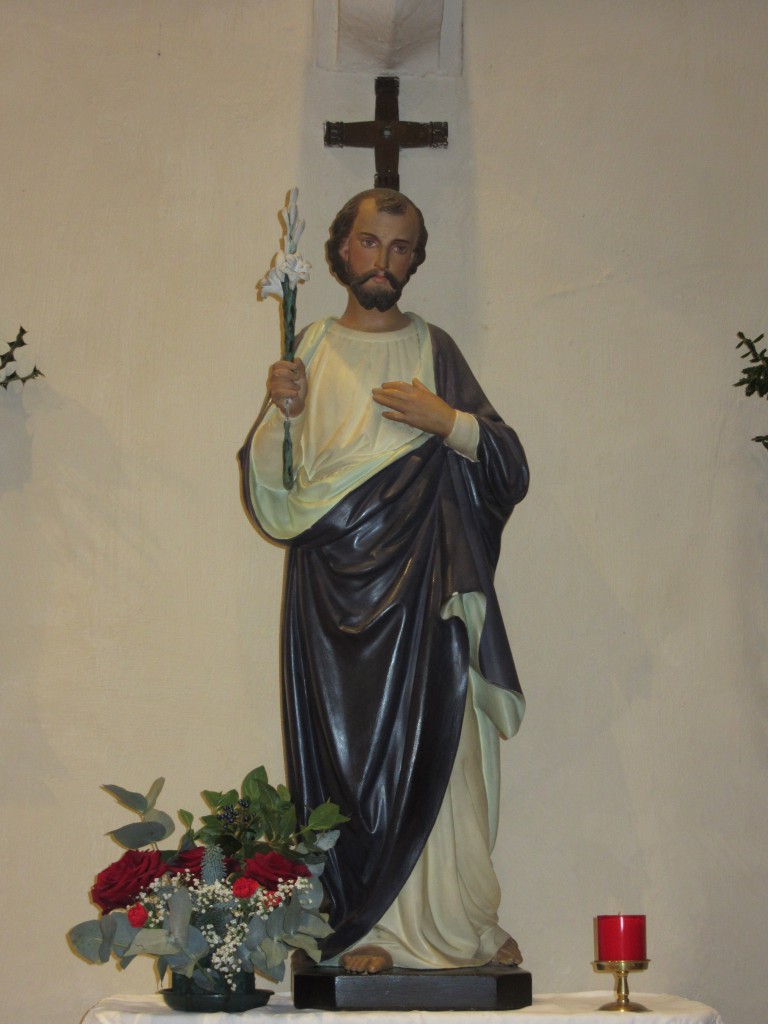 The Church also has several memorials in it to remind us of people who have served the church and the Catholic faith. 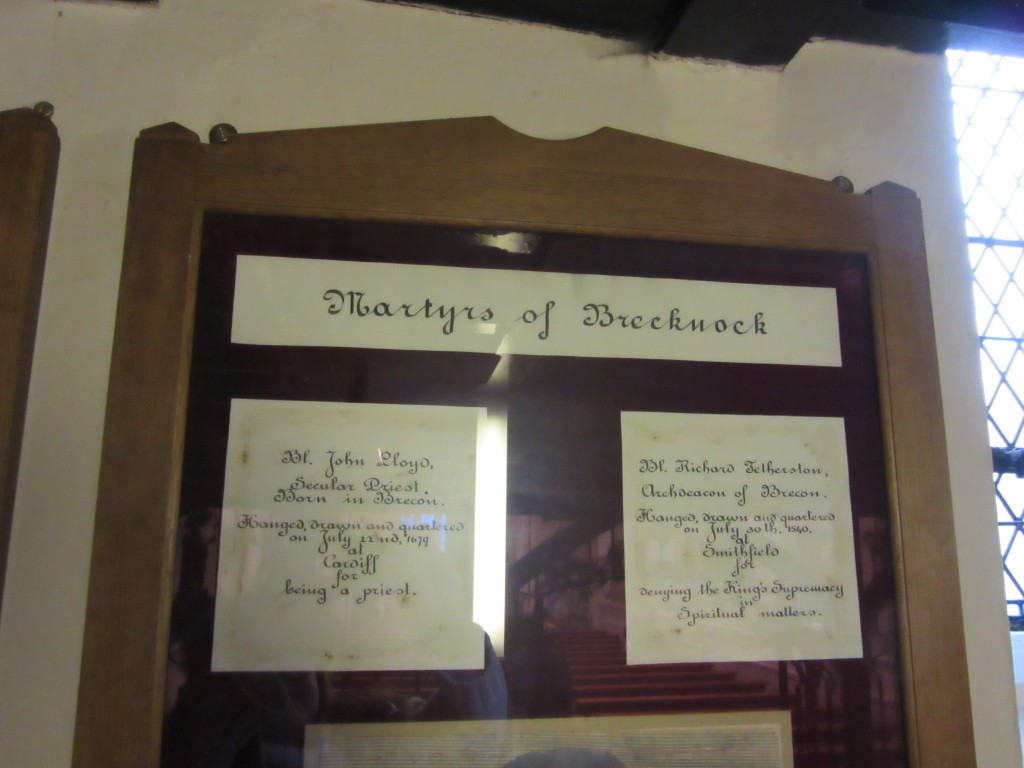 Before and during the Catholic reformation, serving Catholics were executed for their beliefs. Several were born in and around Brecon. Blessed Dom Phillip Powell OSB was born in Tallong in 1594 but,despite being much loved and a man of gentleness, was executed in 1646. It was believed that Reverend William Lloyd was born in Brecon in 1610 and he conducted ministry for over 40 years in secret with the help of sanctuary given by the Thomas Sisters. He died in Brecon Goal. His brother St. John Lloyd was in born in the 1620’s. He was put to death in 1679 when Parliament passed a decree that all condemned priests should be executed without delay. (The Brecon Martyrs Pamphlet, 2015)

Mary and Margaret Thomas sheltered priests, instructed the young and were outstanding in works of charity. This memorial is in recognition of their amazing works during penal times.

St Michael’s in the Community

The influence of the Catholic faith in and around Brecon since the building of St Michael’s has been widespread.

Next to St Michael’s church is the church hall. Prior to being owned by the church the hall was a cinema known as the Electric Theater.

From the Cinema Treasures website “..The Electric Theater opened in 1919 with 400 seats. It screened films and had some variety use on its stage. In 1924, the proprietor was R.W. Phillips & Son and it had gone over to films mainly, showing one show per night with two changes of programme per week at prices of 5d to 1/6d. Variety shows were an occasional extra. It was closed possibly by 1925, when the nearby Coliseum Cinema on Wheat Street opened.”(Roe & Turner, 2014)

From the article by Monsignor Johnson “.. A parish hall or institute had been built in 1905 in Wheat Street and this was extended in the 1930’s”(Johnson, 1984).