People of the Catholic faith have been living in Wales since before Middle ages.

Brecon was a center of Catholicism in Wales following the reformation. According to an article by Monsignor Clyde Johnson (who was the parish priest in St Michaels from 1975 to 1984) the congregation included local people as well as immigrants from Ireland and British Red coat soldiers garrisoned at the barracks in town. (Johnson, 1984) However, there was no purpose-built place for them to worship.

In the 1800’s parishioners met in a house in Watergate, which served as both chapel and presbytery for the Catholic mission. But in 1805 the church sold the land to a man called John Williams who represented the Particular Baptists. The Baptists built the Watergate chapel on the site which still stands today.

In 1829 the Catholic Emancipation Bill was passed by Parliament, but there was strong local and national opposition to it. On the 15th February there was a public meeting in Brecon town square to discuss “ support for the Protestant constitution and against any further concessions being granted to Catholics” (Lewis, 1992). Many people didn’t want a Catholic Church in Brecon and so they sent a petition to the Parliament in London to voice their opposition. However, some people, including the well-respected landowner Penry Williams Esq, supported the idea.

On 29th September 1850 Bishop Brown became the first Bishop of the newly created Diocese of Newport and Menevia. In Brecon the regular congregation had grown to over 200, but there was still no suitable place to meet and celebrate mass. The decision was taken to build a new Catholic church in the centre of the town. They used money from the sale of previous buildings used for worship, plus donations from wealthy benefactors, to build the church that they had been waiting for.

The chosen site was the Three Cocks Inn, stables and garden on Wheat Street and Bake House Lane, now renamed as St Michael’s Street. This building had been purchased by the church following the sale of the Watergate land in 1805 and the upper floor had been converted into a chapel house and presbytery. The old building was flattened to make way for the new church.

Famous architect, Charles Hansom (brother of Hansom Cab designer) was engaged to design it in a simple Gothic style and to accommodate 150 worshipers. (Johnson, 1984). The builder was a Mr. Strawbridge of Bristol and the work was overseen by Father Joseph Jones, a new priest from Yscefiog in Flintshire. (Wheeler, 1881)

The plans included stained glass windows, tiled floors and a gallery for the choristers and an organ.

This map extract clearly shows St. Michael’s, referred to as a chapel on the corner of Wheat Street and St. Michael’s Street. The scale for the map is 1:500 and the survey was carried out in 1887. The 1888 ordnance survey map is a first edition. 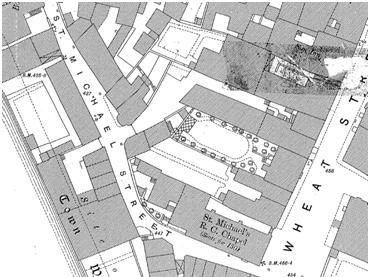 This map extract clearly shows St. Michael’s, referred to as a chapel on the corner of Wheat Street and St. Michael’s Street. The scale for the map is 1:500 and the survey was carried out in 1887. The 1888 ordnance survey map is a first edition. 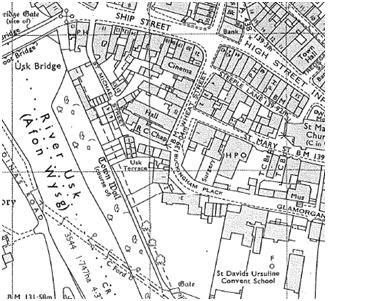